bienvenue! i'm toya and i try to spend nine months of the year travelling around the world and tasting different foods. i have a degree in journalism and love meeting new people and eating fun things like chapulinos (crickets!) in mexico city or exotic fruits in vinales, cuba.

this blog is mostly about food, and in particular breakfast (which can be eaten at any time of day and could consist of anything, so really i mean 'food') in montreal (but i travel as much as i can and it could be havana or nelson or wherever else i might be, so really i mean 'anywhere'). the only reason i'm calling it breakfast in montreal is as an homage to my inspiration, which is the subject of my first blog post.

two things inspired this blog: a series of photographs and today's brunch.
the series of photographs was taken on a recent trip around america, where i cooked as much as possible and (when i could) captured my feats on camera. i would then share these photos on facebook, giving my family and friends an idea of where i was (and what i was eating:) 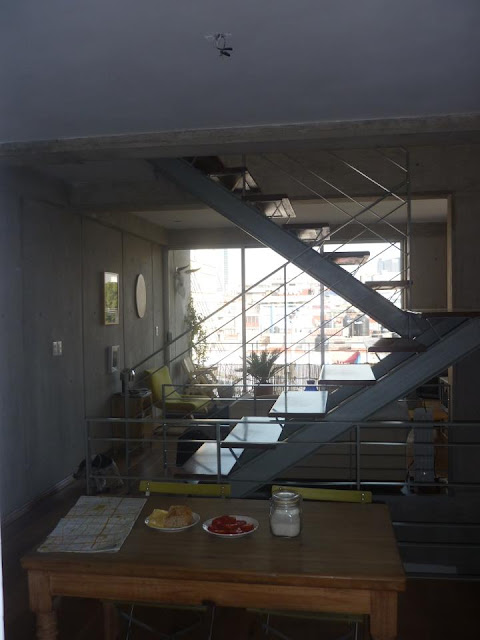 you can barely see the food, but the apartment is nice. it was in a really chill, artsy area called roma norte. excuse my inability to remember any food names, i'll try to search deep and come back and edit.

next we stayed in coyoacan, which is the historic center. it's in the middle of one of the most populous, polluted cities but some parts feel like you're in a small town. it was magical. 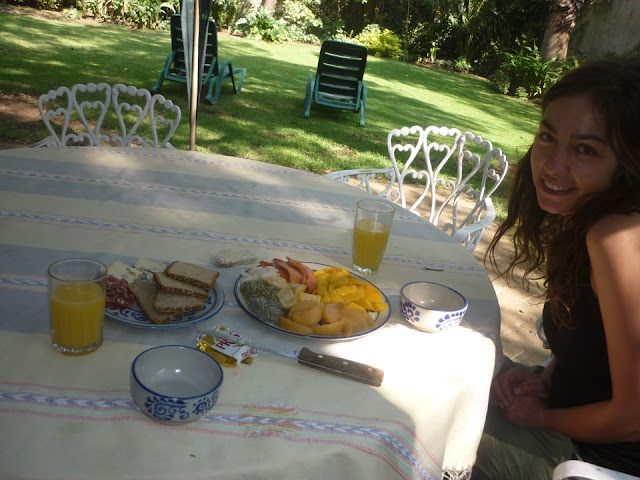 so those were the first couple, i'll do a post or two with the rest in the future. for now, the second part of my inspiration: today's brunch! i'm especially excited about this because it's late and i haven't eaten yet. the couscous is cooling in the freezer (you like my foreshadowing there eh!)

i came up with this yesterday at segal's cuz the feta and corn were cheap and i wanted to make some sort of cold summery salad. i remember at commensal they make a rice-feta-corn-tomato type one which is aight, but definitely beatable. also i had couscous at home and have never cooked couscous in my life, so that needed to be included.

late last night i got bored and started. i roasted two zucchinis, a red pepper, some green onions, and some garlic, all cut lengthwise (except the garlic which i left in the peel). before roasting i put a bunch of olive oil and some balsamic and dijon over em and mixed it all up. at the same time, i steamed 3 corn husks.
when that was all ready, i shaved the corn off the husks and chopped up the veggies and put it in the fridge to cool overnight.

today i made the couscous, which is so incredibly easy; two parts water, one part couscous. bring water to boil, take off stove, add couscous. while the water was coming to a boil i opened and drained a can of chickpeas. i rinsed them super well and took the film off of them, which makes a big texture/taste difference. when the couscous was ready (it takes 5 mins) i put it in the freezer to cool, fluffing it with a fork once in a while. an hour or so later, i took it out and mixed it up with the roasted veggies, corn, chickpeas and 300 g of crumbled feta and added some olive oil. it is amazing. i'm trying to find my camera to take a photo, but for now just picture it. healthy, tasty loveliness. 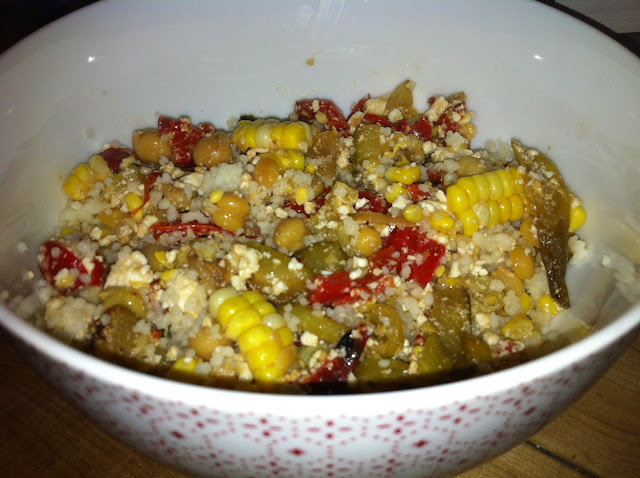